This Detroit Michigan inspired cast iron skillet pizza recipe is for all you thick crust lovers out there that like a crispy outside crust paired with chewy centers for a mouth full of absolute bliss any time of day.

Adapted by our hometown hero Jonny Hunter of the Underground Food Collective, from Kenji Alt-Lopez’s “Serious eats foolproof pizza” recipe , this simple dough and sauce combo smelled so good, we could hardly make it through the photo shoot before eating it all! 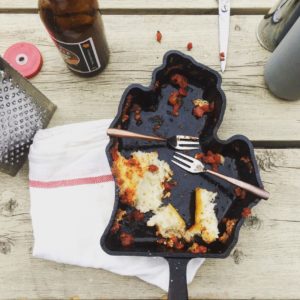 The sizzling awesomeness inside the Michigan skillet’s deep sides was hard to hold back from tearing apart and devouring entirely before it had a chance to even cool. None the less, we managed to get a few shots of the final product, before the mitten shaped pizza waved us all “goodbye!”.

1 tspn. ( 5 g) Kosher salt, plus a little more for sprinkling

Put it all together:

Transfer the skillet into the oven and bake 12 to 15 minutes.  The bottom should be crisp and the cheese should be golden. Sprinkle with grated Parmesan or Pecorino Romano cheese. 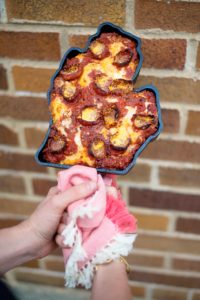 Source the local ingredients for this recipe at http://www.localharvest.org/