Behind the Scenes: American Skillet on “The Chew” 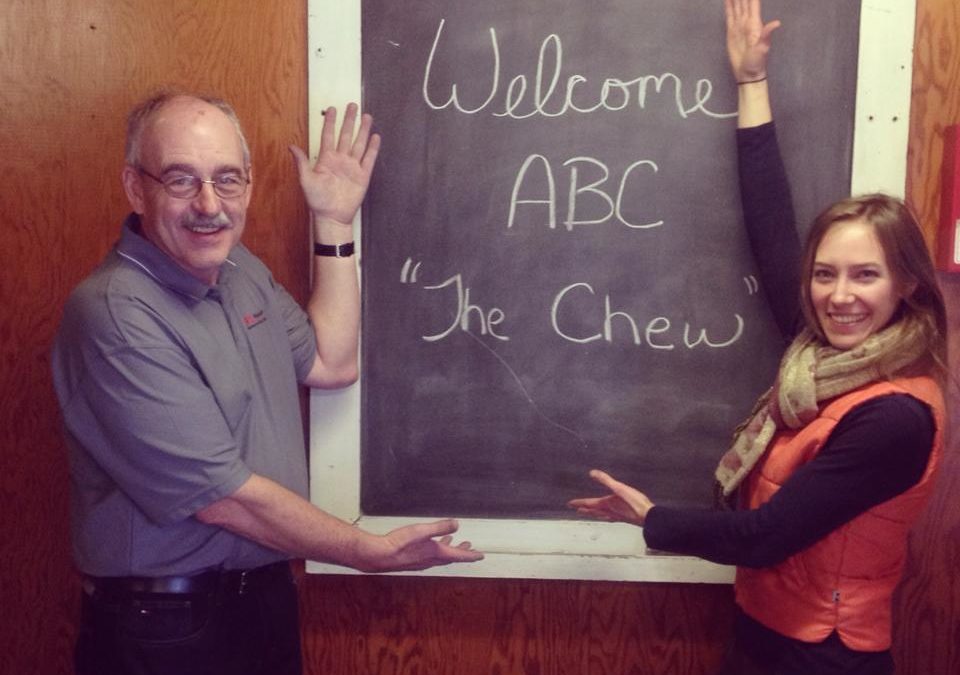 It’s not everyday that a National TV program calls up wanting to feature you on their show. Turns out, that’s pretty much how this whole little story went down. 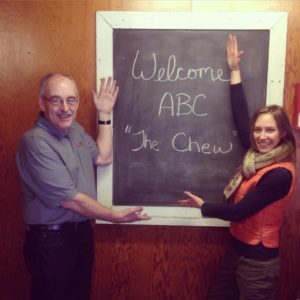 The opportunity came up during our last trip out to the NYC in November 2014 for the Winter Renegade Craft Fair. It just so happened that the Executive Producer of the ABC daytime food-centered talk show, “The Chew“, was Holiday shopping at the fair that weekend. He stopped by our booth inside the Martha Stewart American Made Pavilion for a lovely chat about cast iron cooking and how we make our skillets.  What resulted was an inspired notion that the process involved would make for some awesome TV in a small feature during the show.

To our surprise, we got our first call back from the field Producer at the Chew less than a month later.  A lively, three hour discussion covered all the possible logistics of making a trip out to Wisconsin in mid January to film a feature on our skillets and how they are made, used and sold locally. Needless to say, there were quite a few logistics to iron out.  Shortly after reaching out to our foundry, Roloff Mfg., to see if a full day TV shoot could be arranged within their busy schedule, we had a date set for filming the process from sand moulds to serving table.

Thrilled, honored and proud, the American Skillet Co. team pulled together alongside Roloff Mfg., to get ready for a video production extravaganza that would take place across two days in the dead of Wisconsin’s winter charm.

Our filming adventures the first day involved 3 different locations around Madison. Starting at American Skillet Company, the field producer from The Chew, Lawrence Weibman, shot our pre-seasoning process from quality checks and cleaning, to open fire seasoning and final oven bake out.

All of our skillets are pre-seasoned with 7 layers of Organic Flax seed oil over an open flame before they head to the bake out ovens to get that finished matte look which is unique to our cookwares.

The bake out oven turns an even coat onto the finish of our skillets.

Trying out some fun lines and different ways to introduce the Wisconsin pans to the world.

Second stop of the day was a visit to The Kitchen Gallery, a boutique retailer in downtown Madison who was the first store to carry our cast iron products back in 2012. A fun fact is that they had initially carried the Wisconsin pans in the days before we were pre-seasoning them ~ how brave of them!  We’re pretty sure everyone is glad that we got the pre-seasoning process all figured out now.

Our own little display, front and center, at the Kitchen Gallery, Downtown Madison, WI

The last location to shoot for the day was at Liliana’s Restaurant, where a few lucky friends of ours got to sit down with us and enjoy Chef Dave Heide’s special Macaroni & Cheese entree served up hot inside our Wisconsin skillets. Miss Liliana herself even made an appearance that day in her cute little chef’s jacket, ready to help seat the guests and show them to their table. 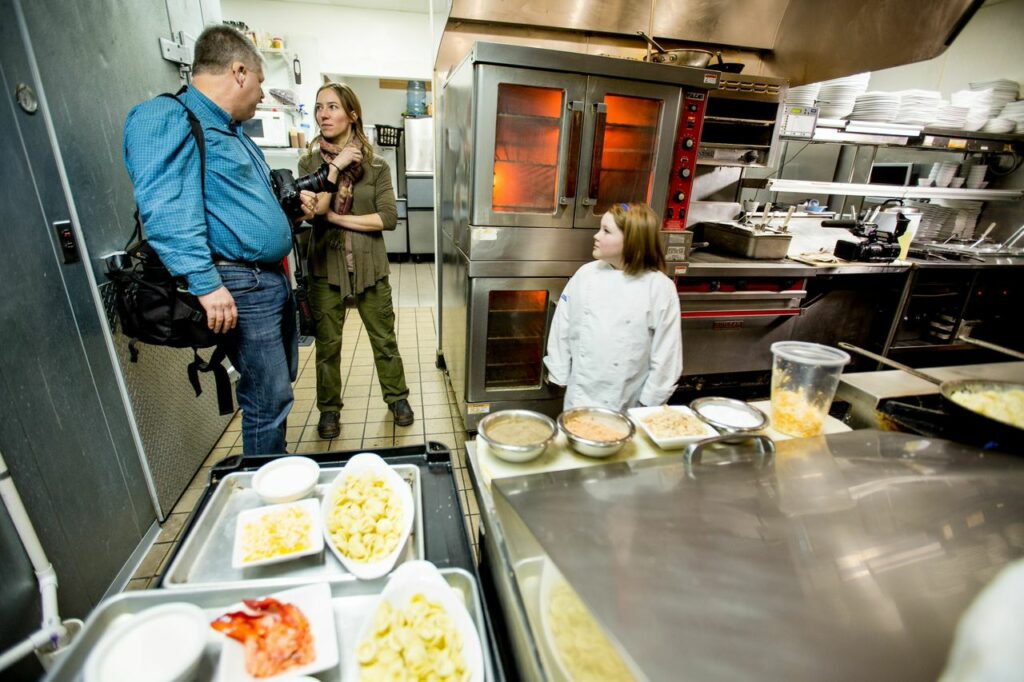 In the kitchen, the ovens glow red hot, ready to bake up the mac’n’cheese entree in those Wisconsin cast iron skillets.

7 Wisconsin cast iron Macaroni and Cheese dishes to eat up at Lilianas Restaurant ~ We love our job!

The second day shooting started bright and early 2 hours north of us in Kaukauna, Wisconsin at Roloff Manufacturing where all of our skillets are cast. We were met that morning with a much bigger video crew to help control all the aspects of shooting for television in a working foundry. The team at Roloff Manufacturing was definitely on their game though, and started us all out right with a safety talk alongside fresh orange juice, bagels, hot coffee, cut fruit and even hand made caramels!

Foundry Owner / President Dave Roloff is the 3rd generation family owner of the company and the hospitality and camaraderie among the foundry workers is just palpable ! This is why we love working with our local manufacturers ~ excellent quality and a great relationship make it that much more meaningful to us. We are truly one giant team. 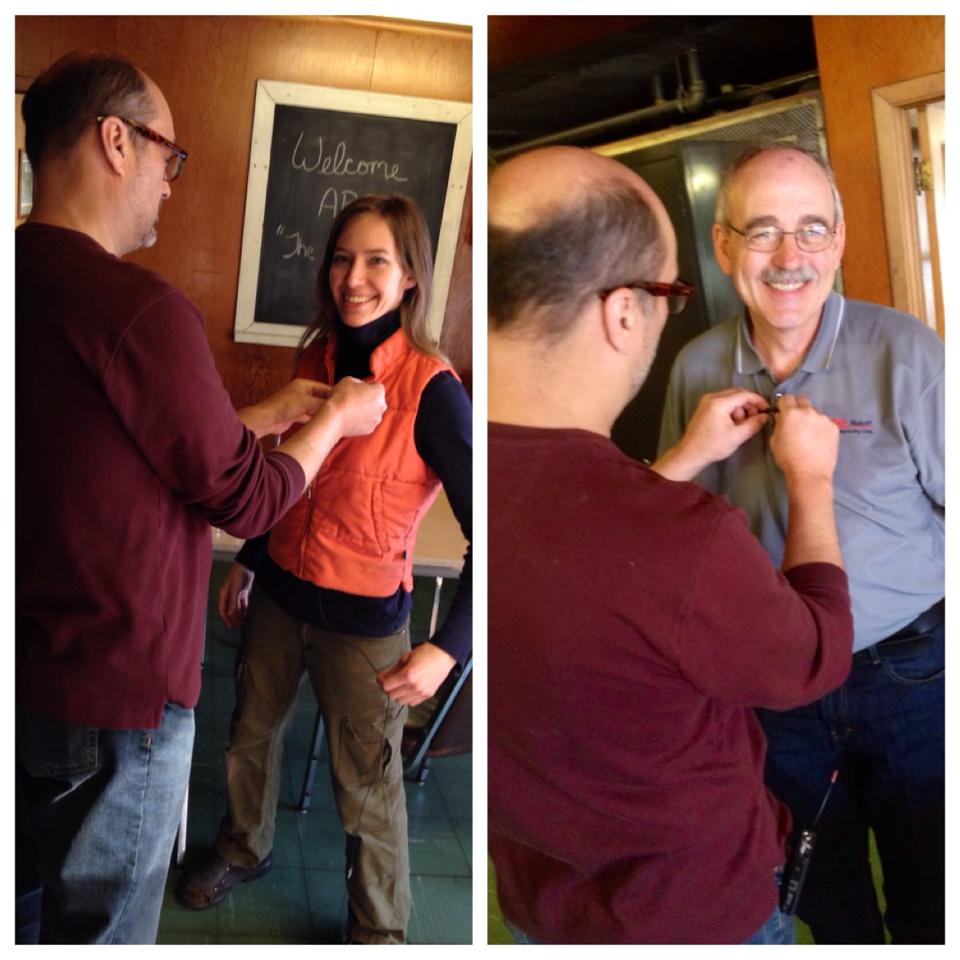 On set in the foundry, Dave and Alisa take the production crew through the process steps from sand moulds and pouring iron to finish grinding.

Alisa and a few of the fella’s ham it up in the core room at Roloff Mfg.

In the hot seat : Furnace operation is a pretty important and spectacular job. Careful monitoring and testing of the molten iron is done on each ladle that comes out of the furnace.

There are about 40 process steps for our cast iron skillets: from the initial design to the final seasoning and boxing.  The goal of the second day at the foundry however, was just to follow the making of the raw castings from the sand moulds around the patterns, to the finish detail grinding.

Arguably, the furnace operation / casting process is one of the most spectacular aspects of the foundry process. At 2800 degrees, molten iron is first tapped into a transfer ladle from the 5 ton furnace where it’s melted. That ladle is then walked around the entire foundry floor, filling up various smaller ladles so each sand mould line can fill their pour floor full of hot metal when it’s ready.  This coordination among the different people in their respective departments on the foundry floor is a fascinating event in and of itself to watch.

Our feature on “The Chew” airs February 23rd 2015 !! We are pumped to see how it all comes together after the incredible amount of footage taken for the short clip on the show.

Many thanks to Lawrence Weibman, the Chew’s field producer (and host of his own show called NYC Food Tour, aka “The Food Guy” on NYC TV) who came out to Madison to film the feature.  He had quite the task of organizing all the different process steps that goes into the making and finishing of our products.  Thankfully, he is an amazingly talented director who’s humor and storytelling ability matched seamlessly with Alisa’s personality, bringing out great energy within the 2 jam-packed days of filming in two different cities.

Also a TREMENDOUS “Thank You!!” goes out to Sharon Vanorny and Elizabeth Van Zeeland for capturing all this photographic magic for us those 2 days!  Without their visual help, we couldn’t have shown you these awesome behind the scenes shots !!